What’s the Difference Between Blockchains, Cryptocurrency, Audit Trails, and Databases?

Find out that blockchains, cryptocurrency, audit trails, and databases have in common and what’s different and why they are important to embedded developers. 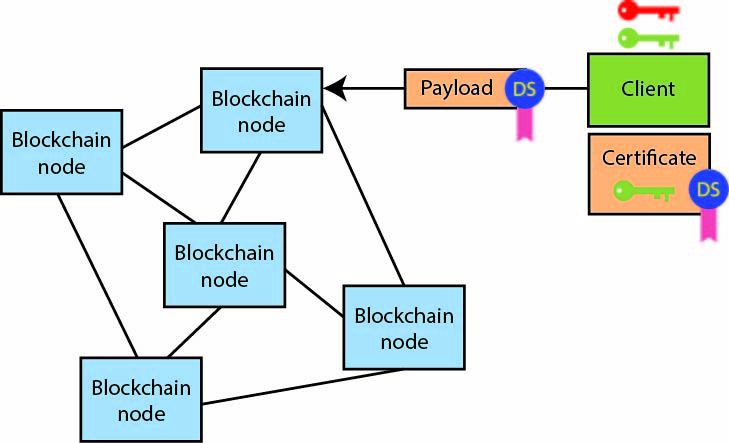 1.) A blockchain system requires a collection of cooperative nodes that maintain the blockchain and accept additions to it. Digital signatures (DS) are used to authenticate the blocks.

Alright, blockchains are a bit more complicated than that–and more useful than they might sound. Most will know blockchains from BitCoin, one of the many cryptocurrencies based on them. But cryptocurrencies are only one use for blockchains. Before getting into applications, let’s take a look at what a blockchain system looks like and how it operates.

To start, you need to know about public key encryption and digital signatures, because the blocks in a blockchain are digitally signed and the blockchain nodes are authenticated to each other (Fig. 1). This allows them to maintain their copy of the blockchain and determine whether information from other nodes is accurate. Those providing nodes to the blockchain must also have their own encryption keys so they can sign their blocks.

A blockchain is actually a logical entity maintained by a blockchain node. It is designed to be a mostly read-only database that grows over time as blocks are added (Fig.  2). Block payloads are accepted by a node and distributed to its peers. There is an acceptance process and verification of digital signatures, but eventually a block will be validated by enough nodes for the block to be permanently added to the blockchain. 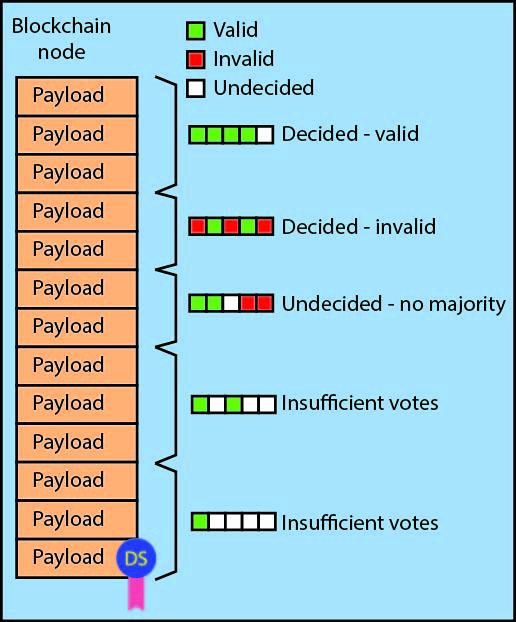 2.) A blockchain node keeps a collection of the blocks in the chain. The blocks are only incorporated permanently when enough nodes accept the block.

At this point, the added block will be replicated in a majority of nodes, and the rest will eventually catch up. This means that all nodes will have a moving high water mark that the collection of nodes agrees with, but the databases will probably not be identical across all the nodes at any point in time.

The system is robust because the blockchain database is replicated. All nodes can accept new blocks and all nodes do not have to be active or accessible all the time although a quorum is needed to activate new blocks.

The challenge for blockchain systems is to maintain performance and scalability as the system grows. A lot depends upon the frequency of updates and the number of systems involved overall in addition to the network. Many blockchain systems operate on the internet, but that isn’t a requirement. They can be used in closed networks as well.

So, back to cryptocurrencies.

A cryptocurrency is a digital asset that can be an exchange medium. These days, cyptocurrencies tend to be implemented using a blockchain. This allows transactions using the cryptocurrency to occur in a decentralized, distributed fashion. Cryptocurrencies are relatively new (the aforementioned Bitcoin started in 2009).

BitCoins are created by “mining.” This uses the hashcash proof-of-work function that is designed to take a lot of computational cycles but not much else. Specialized hardware has been developed to create BitCoins. The amount of time needed to generate just one BitCoin varies significantly depending upon the hardware used.

Just about any application that requires a registered ledger is a candidate for blockchain support. Many embedded applications simply need a single database, but if there is a need for a more robust solution, blockchains might make sense.

Blockchains have been touted as solutions for all sorts of applications. For example, there are a number of efforts to use them in educational environments. In this instance, the various records, testing, and certifications a person earns are tracked using blocks. This approach allows for the distribution of this information. The blocks normally do not contain all the information, but rather, links to digitally signed packages.

Blockchains can also be used for conventional ledger-based applications. These applications include backend clearing and settlement. They could be used in real estate transactions, for tracking music or other multimedia content, or even for handling contracts.

Blockchain use is still in its infancy. Security remains a key component and it should not be overlooked when considering or using this technology. Incorrect implementations can cause significant security problems. Developers also need to consider the scope of implementation, frequency of updates, and hardware and storage requirements.